"My teaching studio seeks to provide the highest quality music instruction through a classical music curriculum, designed for the individual needs of each student.  More and more, evidence suggests that high-quality classical piano training improves students' learning skills.  I believe in the importance of giving each student a strong background in music theory, history, and ear training.  Regular recital performances—both solo and ensemble—are available to my students, as well as opportunities to compete, for those suited."

Pianist Robert Sacks is a native of , , where his early musical training included piano studies with Annetta Kaplan, as well as clarinet, music theory and ear training through the for the Arts.   Mr. Sacks attended the Peabody Conservatory of Music in , where he was a student of noted performer and teacher Walter Hautzig.  While a student at , he was the recipient of the school’s Unger Foundation Award.  He graduated with a Bachelor of Music degree in Piano Performance. 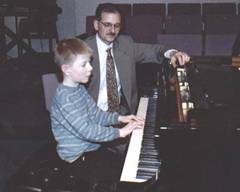 Upon graduation from , Mr. Sacks accepted a University Fellowship at , where he earned a Master of Music degree in Piano Performance.  While a student at , he won the University’s Concerto Competition, and performed the Brahms d minor Piano Concerto with the University Orchestra.  He joined the University’s piano faculty after receiving his degree, and at the same time joined the faculty of the for the Arts.  During this period of his life, Mr. Sacks was a founding member of Syracuse’s Crouse Chamber Players, and gave solo and chamber music performances in the northeastern US and in Switzerland.

After a short stint in the financial services industry, Mr. Sacks established a teaching studio in , which he has operated since 1987.  In addition to his private piano teaching, he has been active as accompanist, lecturer, chamber music coach and contest adjudicator.  He has authored a number of articles for Clavier Magazine.  He spent several years on the faculty of the Division of Preparatory and Community Music at in .  From 2004-2013 he was a member of the faculty of the OPUS Chamber Music Camp, as chamber music coach and clinician, and was the Camp’s Piano Coordinator.  Mr. Sacks is the former studio accompanist for ’s Sapphyre Strings.

In addition to performances with the Spectrum Duo, many of his recitals in recent years have been as a member of the Spectrum Trio, which also includes his wife, violinist Vivienne Venderley, and cellist Edward Moore.  The Trio has performed extensively in the area, and has appeared on a national radio broadcast.  In the fall of 1995, the group gave its first East Coast performances.  He is presently accompanist and collaborative keyboardist at in .

or e-mail him at piano@spectrumduo.com